by Kyia Anderson
August 17, 2010
Although I sat on the sidelines of the 10th Annual Ore 2 Shore I still got to get in on some racing action. I witnessed first hand what it requires to make it to the feed zones to support the top racers in this point to point race that spans 48 miles from the higher elevation copper country in Negaunee, MI to the Ore docks on the shores of Lake Superior In Marquette, MI

The Hard Rock, 48 miles of full on mountain biking action, proved to be a nail biter throughout the whole race in the men's and women's race Saturday morning. Racers take off from Negaunee in a large pack paced by a dirt bike, weaving down roads that take them to an abandoned old rail line that is stained red from years of transporting iron ore. Quickly racers string out into a long line so they can draft and ride the single line that is worn in from the years this race has buzzed along this route. As racers hit the Luge climb near the old Suicide Bowl Nordic facility at 4 miles in things are already breaking up and packs are forming. One hopes that they make it to the top of this climb in a good group, as drafting is very important over the next 44 miles of snowmobile trails, rocky climbs under the power lines and a mix of double track and road sections. When I asked Jenna Rinehart (Specialized/Nicolletbike.com) how the race played out for her in this section she say's, "I came out of The Luge section too well as she quickly realized that I was riding above my fitness level for this season and was finding myself in a bit of trouble and worrying about the 46 miles to go".

Our second view of the racing action came at mile 8, as the race sped through Ishpeming we saw the Eppen's (a husband/ wife tandem team that won the Ore 2 Shore several years ago from Iowa City, IA) on the front pulling a pack of 15 guys. The first woman racer Jenna Rinehart was sitting in about 25th place overall with Sara Kylander-Johnson, a.k.a SKJ (Trek Co-op) 26 seconds later.

We hopped in the car and got hung up at a stop light as we were trying to catch the racing action on the rail line over pass on Hwy 28 where racers skirt the edge of the rail line and then up a sandy hill that soon takes racers to a series of sand pits and rocky climbs along the power lines. We had missed the front runners but were able to catch the racing action of the 4th-7th place ladies. Rebecca Sauber (LCR) and Danielle Musto (Salsa) seemed to be in a heated battle that lasted all the way to the finish.

Back in the car absorbing all of the bumps to the Deer Lake road feed zone we went and once there I finally got to witness the camaraderie and sportsmanship between the top racers husbands and wives who were doing the feeding and bug swatting. Soon we had bottles in hand and watched the lead group come out of the double track muddier than previous with Nathan Guerra (Mr. Tree Racing) leading a pack that consisted of 8 riders with Darren Braun (Adventure 212/Specialized) dangling, a couple of seconds back Chris Peariso (Adventure 212/Specialized) who I communicated with via email states" I took an assisted tumble at about mile 12 and was forced to chase after getting the bike back together. I motored through the third chase group on the road and ultimately made it to group two on the road with some help from Tyler Gauthier. Once I got onto the second chase group Ryan Krayer, also of the Adventure 212/Specialized team came back and asked me what I wanted to do and if I was feeling OK. After I replied get me to the front we took off from the second chase group in search of the lead of the race". Jenna Rinehart was still holding the lead and SKJ was dangling off of her group by just 4 seconds. At this point Susan Stevens (Quiring) was 1.5 minutes back and then we were heading back to the car to get to the famous Iron Bridge climb that is long and paved. 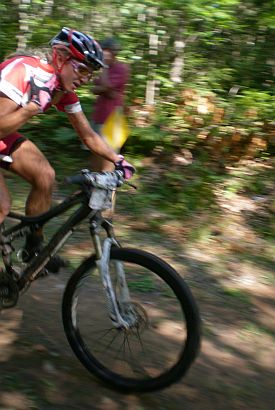 Again we missed the top male riders at the Iron Bridge climb but Chris commented that after we saw them at the Deer Lake road crossing, "We chased for about 10 more miles before picking up Darrin Braun, also of the Adventure 212/Specialized team and Mark Lalonde. The 4 of us worked hard to get back to the front of the race, got within 15 seconds of the lead group, but were never able to seal the deal. As soon as we crested the long Paved climb, Michael Simonson went to the front of the lead group and they were gone, leaving us to settle for eight through eleventh on the day! We did get to see the women's leader Jenna at about a minute after our arrival and I asked her what was happening at this point in the race for her and she states "I was on the wheel of a guy on a cross bike and we were trying to bridge a gap to a pack of 15, I was just starting to come around after my melt down earlier in the race". SKJ was 1.5 min back at this point and close on her heals was Susan Stephens, the Adventure 212 ladies, Rebecca Sauber was pulling the pack she was in and Danielle Musto was very present as they made their way up the climb.

We motored along quickly and hit up the The Sandpit, a unique technical feature at 4 miles to go. We caught the front of the men's race and Michael Simonson had a 5 second lead on the chasers, a mix of several past O2S past champions and podium finishers, trying to pick a line down the sand. We heckled the racers and got a good smile out of Jenna as she pretty much had the race in the bag barring any disasters. A good 4 minutes back we witnessed a change in the women's race as Susan was just ahead of SKJ going into the sandpit and SKJ was looking pretty tired from her efforts.

Unfortunately we missed the finish since it took us a while to hike out of the sandpit and test our patience with cars actually obeying the speed limits but once to the finish we saw the timing board flash TJ Woodruf as the 2010 Ore 2 Shore 48 mile winner and Jenna Rinehart!

It was hard for me to sit on the sidelines of this years race due to a lower back injury that forced me to retire this spring, but since I've been taking it easy this summer the healing process has begun and I'm super pumped with the fact that I got about 8 hours of killer Yooper single track riding in while up in the Marquette, MI, area with out too much pain!