Cloudy skies and a light drizzle made it a perfect day to spend indoors or under the tents viewing some of the latest products from manufacturers and checking out the fall high school package pricing from the area ski shops. 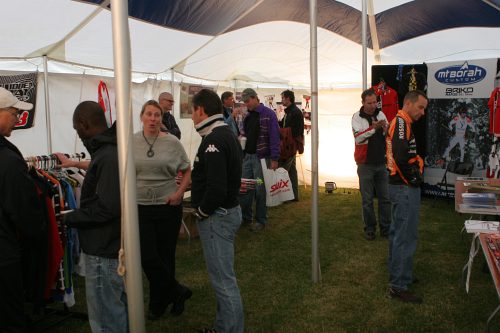 A few highlights from the expo products:

After touring the expo, coaches gathered inside the Vasaloppet Nordic Center for the Fall Coaches meeting at 10 am.

This year's fall coaches meeting was highlighted by the absence of any major issues or changes for the 2010-11 season.  Newly elected President Pete Tremaine led an efficient agenda that covered the major points and reminders.

No major changes for the 2011 State Meet.  The event will feature freestyle racing, individual starts, on the Silver trail at Giants Ridge in the morning, followed by a pursuit format classical race in the afternoon on the Gold/Cedar trail systems.

The meeting wrapped up with a big door prize drawing for all of the coaches with the prizes donated by the expo exhibitors.

Photoset: 35 photos
Video: NIS Xcelerator Binding, Throat Coat
About Us | Advertising Information | Privacy Statement | This service provided to you according to our Visitor Agreement
© 2021 skinnyski.com. All Rights Reserved.