This weeks report includes recaps from the big Pro XCT Subaru Cup in Wisconsin, the Jamestown Epic race, the Wheelhouse classic and a look ahead to this weekend plus a few events coming up later in the summer.

Nordic Mountain in Wisconsin was host to the most recent stop in the PRO XCT mountain bike series which featured top pros in the country racing over two days with the main event, cross country, taking place Saturday. Favorable weather conditions only added to the positive feedback among the riders with many pros stating it was their favorite race in the national series. Overall cross country titles in the Pro cross country event went to Georgia Gould and Max Plaxton. Many Midwest riders had solid results competing among the nations best including Tristan Schouten (14th), Brian Mattter (15th), Nathan Guerra (20th) and Mike Phillips (23rd) all notching top 25 finishes. In the Pro women, Jenna Rinehart was the top Midwest women in 13th and Abbigail Strigel, showing improvement each year, to record a 15th among the 30 female finishers.

I missed this years version of the Subaru Cup but Jake, Jonell and Jake's friend Jess made the 8 hour trip east and Jake reports on the race: 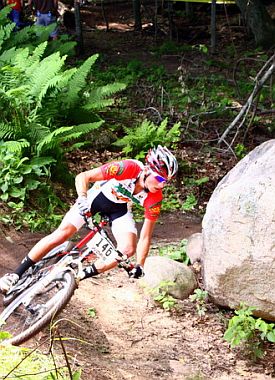 I pre-rode the course at Nordic mountain with teammate Casey Hildebrandt the afternoon. Riding I took note of the new features to the course for this year which included the start climb and a new section of downhill with World cup A and B lines. On Friday night the course was tacky and fast, and looked ideal for the race. Saturday it was sunny and perfect mid 70's. The start of the Cat 1 was hectic dash to get a good spot on the start line. I started second row behind a Junior from South Africa. The start climb was two times longer than last year and the second half was steep and hurt at the start. I was able to go into the single track around 10th overall. There was a big bottle neck behind me with riders having to unclip and wait. I was able to ride the A lines and were super fun. I rode in about 10th position for the first 4 mile lap. My speed wasn't as fast as the top guys so I was just trying to ride my own race. I started hurting third lap and sat up a bit.

On beginning of 4th and final lap a junior from Michigan caught me and I stuck with him and was able to catch some more juniors. On the descent down the technical rocky "mountain" I made my move and gaped Michigan junior and cruised to the finish. The course was very spectator friendly and could watch at multiple spots. My mom and girlfriend were able to see me five times in the first mile or so. There was a good stacked field of juniors from all over the country. The race took me 1:24 which was a nice change from the 2 hour races.

Steve Wenzel of Fargo, ND, made the trip west to Jamestown to compete in the Pipestem Epic. Steve gives the full run down:

The Pipestem Epic is an event held in conjunction with the Pipestem Xterra Triathlon at the same location north of Jamestown, ND, near the Pipestem Reservoir. Steve Aesoph, race director, thought it would be a good way to "loosen" the legs. The ride features all of the North Ridge Trail, horse trails, off-trail and gravel road riding. No trail map, no pre-riding, you will "see the next trail marker from the one your at." 13 riders toed the start line with the skies to the west loaded with more rain then what had fell the night before.

Things started at a brisk pace with Zach Johnson and Matt Wenzel pulling the train. All riders were covered with mud within the first 5 minutes of starting the race. 15 minutes in the skies did not disappoint and threw more water on us to make it even more interesting. Due to all of the moisture the reservoir was full and there were a number of times that we skirted right up to the waters edge. Our bikes were tossed over fences, there were stream crossings, waist high prairie grass and hub deep water to pedal through all day long. Zach and Matt were able to keep off the front most of the day and finished first and second with Steve Wenzel, Jon Darling and Matt Engen completing the top 5.

Great awards with a Garmin Edge 500 for first, a pair of Oakley Jawbones for second and a Stan's tubeless kit for third. The race lived up to it's Epic name sake due to the parts wrecked and all of the rain. An excellent event that I would highly recommend in the future.

Jake made the double on the weekend, heading back west in order to compete in what has become one of the favorite races among riders in the Minnesota Series and reports on Sunday's race: 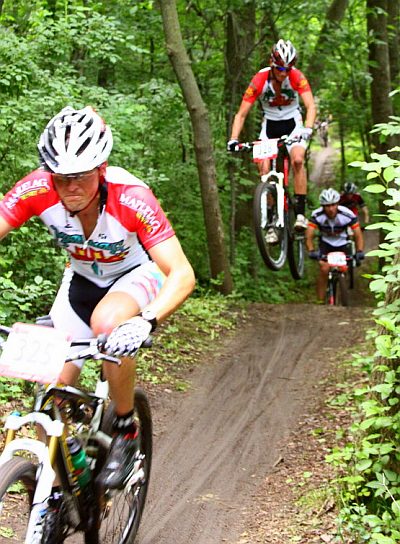 I started a warm up at 12:15 with Oftedahl bros, Sam and Eric. At first my legs were sore and tight but after climbing started to feel better. It was humid and warm and thankfully the sun wasn't out or else it would of been toasty. The start had the MNMBS regulars plus legend Jeff Hall at the line. The start around the grassy field was fast and I was holding 5th wheel. Before the single track I moved up to 3rd and H-Wood was on my wheel. The first turn I hit fast and took a bad line and Hollywood followed and took a nasty digger. Once we got rolling in the tight twisty single track I was leading a group of about 5 guys.

In the single track it didn't feel has hot and muggy. It was my first time doing the Stairway to Heaven climb after not racing this course since I was a Sport rider. It was crazy hard! Moving 3mph in the open with heat was like a steam sauna. There were a lot of loose rocks and it was very steep. I just got in my smallest gear and tried spinning my way up. On the start of the third lap Barry Tungesth and Micheal McBurney were riding with me and Eric Oftedahl. Both Barry and Michael had great legs and went flying by on one of the climbs, Barry ended up having a great race ending up third.

On the third lap my legs were getting tired from the day before. I just tried eating, drinking and get in my own groove. I was sitting in sixth place and Devin Curran was closing in on me and there was a big gap behind us. I rode with Devin for a lap and a half and Devin was riding clean and smooth and I was just trying to lower the heart rate. On the last lap, hitting the awesome downhill with sweet berms and jumps everywhere is were I started to feel good again.  (Photo: Jessica Stelter) I rode smooth and fast and started feeling good and cruised to the finish. I loved the course because of the fast flowy single track but also the fun technical downhills. 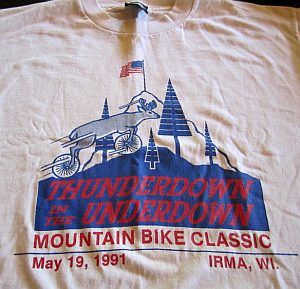 With the Fourth of July weekend on tap, the mountain bike racing is relatively quiet in the Midwest. An endurance event is set to take place in Irma with the running of the Thunderdown in the Underdown, featuring 3, 6 and 10 hour races. I always remember this event as it was one of my first mountain bike races I ever did when part of the Midwest Mountain bike series in 1990 and 1991. I still have the t-shirt from 91 and Jonell gave me the go ahead to wear for Fourth of July since it has a sweet American flag waving nicely at the top!

A few events popping up on the radar coming up later this month and next to put on the calendar of potential races to do:

In a spin on the Norwegian Birkebeiner triple series, the CXC group presents a 46km Telemark Forest mountain bike event on July 16th as part of the CXC triple. The course will follow non-technical, but challenging terrain with the start and finish at the historical Telemark Resort in the old coliseum area near The Hytte.

North Dakota's most famous mountain bike trail will feature a mountain bike race on the entire 105 miles of mountain bike friendly singletrack known as the MahDaahHey. The race will start at CCC and end at Sully. There is no entry fee and riders finish to prove "they are legendary".

The Blacks Grove Recreation Area will be hosting their second mountain bike race after the inaugural race last August with the River Crossing MTB race. I had a chance to check out this trail last Fall and really enjoyed the trail with its mostly tight singletrack and quick up and downs. A grass roots feel event, easy to find off Hwy 10. If anything, be sure to check out the trail when passing through the area.

If you have an event or information you would like to have posted in future reports, feel free to drop a note at