This weeks report recaps the Chequamegon Fat Tire Festival including a special quick interview with the incredible Eppen tandem team, and a look ahead to the final race in the Minnesota series and race #11 in the Wisconsin series.

Conditions for the 29th running of the Chequamegon Fat Tire Festival were pretty much perfect. Cool morning temps Saturday with dry conditions with a few changes in the surface conditions of the course making for blazing speeds and officially unofficially (love Gaylon when he says this) record times in the Short and Fat and 40. Sunday saw a little light rain adding to the fun of Sunday Funday. A record number of participants competed this year as race organizers allowed a couple hundred or so extra to toe the line among the events on Saturday. 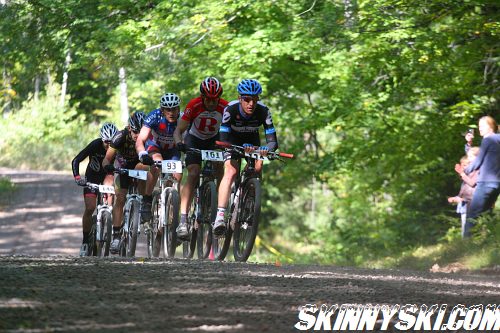 The buzz this year was the entry of Pro Tour riders, Jason McCartney of the Radioshack team and Christian Vande Velde of Garmin/Cervalo. These two riders were drilling it off the front after Rosies field, making for some extra fast racing. Brian Matter nailed the coveted three peat, notched his fourth win and put him in the probable untouchable record books. Matter pulled away from the main group of McCartney, CVV, Michael Olheiser and Tj Woodruff as the last two riders both posted their best finishes ever. Lea Davison also benefited from the fast conditions as she broke her own record, taking another win in the 40 over Minnesota riders, Jenna Rinehart and Rebecca Sauber.

Short and Fat highlights include another official unofficial record time as junior sensation on the road and cyclo-cross circuit blazed the course in a rocking time of 48:41. The 16 mile race was stacked with the future of the sport as seven of the top 10 spots included riders under 18, battling for the top spot which was awesome. Nice work kids. 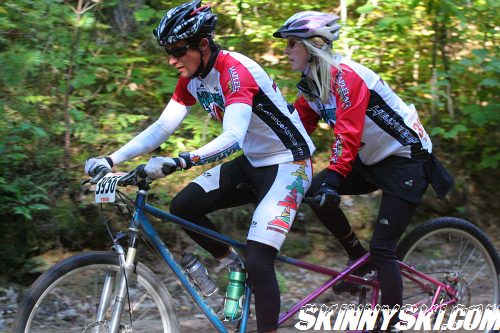 The entire Richards family made the trek east with Jonell and I competing on the tandem in the short race after a two year absence and Jake tackled his first 40 after competing in the Short and Fat for five years. Jake met his goal of where he was hoping to place, had a fun time despite reporting the race being "hardest of the year". Personally, it was great to be a part of the race atmosphere and move the wheels on our "big clown bike" the 29r tandem, with the goal to finish in one piece with no mechanicals. Our mission was accomplished as we didn't have one issue this year including a secure timing chain and able to ride the entire course without having to get off once. Racing the tandem gives me huge, huge appreciation the effort the amazing tandem duo of Brian and Kim Eppen who, in my opinion, recorded the most impressive finish in the Fat tire this year pinning a top 20 finish.

I touched base with the Eppens as Brian took time to answer a few questions about what it is like rolling a bicycle built for two. He also reported they shot some amazing video coverage, running a cam in the front and back, catching the action, including getting the hole shot at Rosies Fields, riding at the front, hitting 50 mph on the descents(!!) en route to a 13th place overall with an incredible time of 2 hours, 8 minutes and five seconds. 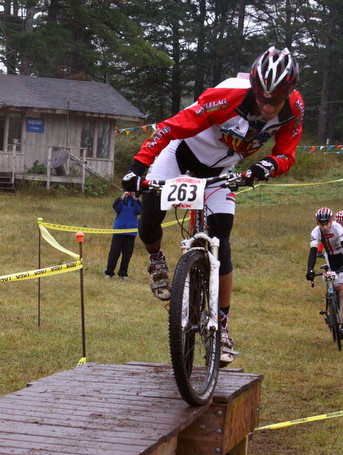 Sunday riders woke to wet cars and rain moving in from the south. Feeling a bit sluggish from the day before, it was tough to find motivation to chamois up again. But we didn't drive 7 hours on Friday to jump back in the car and roll home again, and knowing race director Gary Crandall and his awesome staff would be there to make the day as fun as possible, we were ready to get the wheels moving proper. For us, Sunday Funday is a great way to end the weekend and captures a lot of things we like to do on our bike. Bikes take priority in the house with vip parking in the driveway, as dirt jumping, lake jumping, crazy singletrack riding and just goofing around and having fun on two wheels occupying a lot of available time.

The day started out with the Crit Cross qualifier. The course was similar to last year with barriers, twisty off camber turns, a little singletrack, a short stair section and punching climbing. There was a little light drizzle I thought would make the corners slippery but the traction was good, the sand got compacted and the riding was fun. To keep warm until the Crit Cross finals, we participated in the other fun events including the hill climb, log pull, bike limbo, bunny hopping, and balance beam as fellow riders got stamps on a card to be placed in a drawing for a festival entry in 2012.

The Crit Cross final capped off a great day as Jake did battle with Joseph Maloney, riding all the obstacles to make a late race attack and take the win. Although initially it was faster to dismount, the exit out of the obstacles was faster, Jake felt, that gave him the advantage to cross the line first. It was great to be back racing one of my favorite type of races, all the time watching the race unfold, with family yelling and making us smile while a heavy rain shower near the end did little to dampen anyone's spirit.

Fantastic job once again to the race organizers, the volunteers, and the racers from the top to the bottom who kept the wheels moving to make everything happen.

The Minnesota series winds down its season in St Cloud at the popular "Jail Trail" that features tight and twisty singletrack designed and built by former Pro and new mom, Kyia Anderson along with the Mid Central Cyclists.The course was designed to challenge, not only the Expert riders, but the newcomers as well on a mix of fluid single-track with open areas to pass. The course wraps around the west side of the Prison, and will include a couple of medium switch back climbs. The race also serves as the Minnesota State Singlespeed Championships with racers competing in the Sport division for this honor.  And race directors are reporting excellent course conditions at press time.

Race #11 heads to White Lake and the Bear Paw adventure resort as riders will tackle a variety of climbs, descents, double track, single track, rocks, roots, and switchbacks. The scenery is diverse as the trails: a tornado blow down, mature hemlock/white pine forest mixed with maple/oak forest. If you aren't a Packers fan, you might not want to visit the bar post race! HA!