by Matt Liebsch
March 14, 2012
This past week was my first time racing the Engadin Ski Marathon and my first time racing in Europe.  What an incredible experience!  I arrived at the Zurich airport Tuesday morning and without my checked ski bag.  Sort of a nice deal since I didn’t have to haul my 50lb ski bag on 4 hours of train rides.  From the Zurich airport I took a train with Clarke Sullivan and Caitlin Compton-Gregg to the Zurich main station, then Chur and then on the Rhaetain Railway up over the mountains and dropping into the Engadin Valley… so beautiful.

We stayed at the Hotel Bernina in the town of Samaden.  My first day in Europe, I was kind of worthless.  Jet lag and the altitude made a 30min ski feel like a marathon.  But after resisting the urge to nap and a solid night’s sleep, I woke up Wednesday morning feeling great.  Lars Flora, my roommate, Clarke Sullivan and I classic skied up Val Fex for a mountain side lunch of risotto, speck, cheese, cappuccinos, cola and beer.  The mountain and sun were amazing!

The next few days we spent more time exploring the Engadin Valley.  Everything is connected by bus, trains and a vast network of ski trails.  On Friday, we began final course inspection and ski and wax testing; luckily, my ski bag finally arrived so I could do the race on my own gear.

Tony Wiederkehr, our trip organizer, sponsor and just super awesome guy, was given the task of being Team Captain.  Tony was great at getting all the race details in order.  We had great logistics for waxing, parking, feeds and everything. 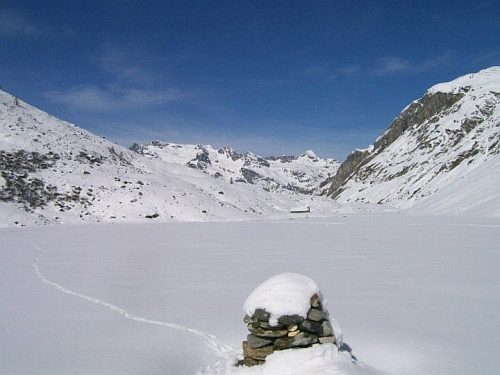 The race itself was simply amazing and just a little crazy.  Starting with thousands of other skiers all at the same time is a little interesting.  We began on 10km of flat lake skiing into a head wind and soon no elite men wanted to lead.  Instantly our group was swallowed by the hundreds of skis.  I was stuck in about 500th place skiing behind the elite women and masters.  So much traffic I could barely move or ski.

As we progressed, the wide trail on the lake, up to 10 lanes, would narrow to 1-2 lanes at points and then back wide again.  Somehow I managed to move up by the time we hit the first uphill of the race.  I made my way into 3rd position hoping that the race would break apart a little but it was not to be.  I spent the remainder of the race skiing to close to the front since it was not relaxing to be in the scrum of the pack… I saw way to many crashes, broken poles and one guy shoot off into a river ravine! 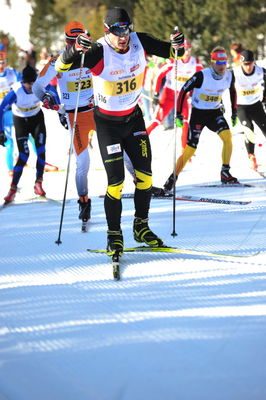 The rest of the race went well but it was a very large group sprint finish at the end with lots of bike/team tactics.  The race course is mostly flat/downhill and very fast snow this year so the top 25 finished within a close span.  I was 25th place, 14seconds back. Other American men included Lars Flora, Billy Demong and Torin Koos... 35th, 38th, and 83rd.  The American women that raced included Holly Brooks, Caitlin Compton, Evelyn Dong and Nicole DeYong; Holly finished 8th, 2:30 back and the rest of the women finished in the top 20.  Cailtin was skiing near Holly when she fell with 10km to go.  She hit her head and suffered a mild concussion.  When I saw her last she was feeling a little better and recovering.

Switzerland and the Engadin Valley are an amazing place and great for skiing!  Racing in Europe against deep and tough competition was a great experience for me. I felt good the entire race and had a lot of fun.  I just wish the snow had been slower or a few more hills to let it become a little bit more of a fitness race instead of a tactics race. Overall, great experience!

Thank you to all my great sponsors that made this trip and this season possible!
Team Strong Heart, Team Biekie, Tony Wiederkehr, Gear West, The Fix Studio, Fischer, Swix, Casco Eyewear

About Us | Advertising Information | Privacy Statement | This service provided to you according to our Visitor Agreement
© 2023 skinnyski.com. All Rights Reserved.