A relatively quiet weekend in Minnesota and Wisconsin with the long Fourth of July holiday weekend taking precedent over the weekend. A handful of riders from the Midwest did trek west for the Breckenridge Firecracker 50 held in Colorado. This weeks report includes recaps from Breck, last weekend's Lutsen 99er a few mountain bike related items to note plus a look ahead to a busy weekend.

Steve Wenzel of Fargo, ND. was one of a handful of riders from the Midwest that attended the 13th annual Breckenridge Firecracker 50 and files a nice report from  Colorado:

The Firecracker 50 in its 13th year started by rolling down the Main street of Breckenridge CO in front of the towns annual 4th of July parade.  I bet I slapped a couple of hundred kids hands as they held them out in anticipation of the parade giving the racers an excellent send off to the race.  (Photo: Matt Wenzel)

I climbed out of the car from 900ft Wednesday afternoon clicking in Thursday morning above 9000ft looking forward to a challenging day.  The first 6 miles is a climb out of Breckenridge up an old railroad grade.  At the top of the climb you hit a dusty Jeep trail that takes you across and into the start of a wicked single track that the locals call “Nightmare”.  Yikes!  Coming from the upper Midwest the name “Nightmare” fit perfectly.  Keeping your hands off the brake and letting the bike do the work was the tip of the day.

After a mix of two track and single track you make your way up a tough climb named  “Little French Flume Trail”.  On the first lap, there was plenty of hike a bike due to the loose conditions and number of racers, but we were all in the same boat.  At the top of the climb there was a banjo player picking away to lift your spirits.  From the top of the flume you cross a section of sweet single track that lets you appreciate bike handling skills and the ability to concentrate.  You have to make sure you don’t smack your right pedal on the side of the mountain and you definitely want to keep your left pedal in the track as it was a long way down.

The last part of the loop offered plenty of punchy climbs and beautiful views, challenging for sure.  In total, 4000’ of climbing per lap. 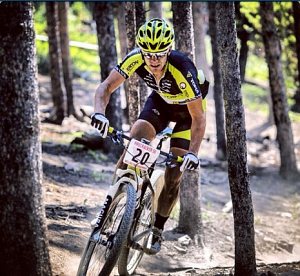 There were 4 aid stations strategically located throughout the loop.  I started with one full bottle and finished with half of that same bottle.  The aid stations were top notch.  Gel, Shot Blocks and your choice of water or drink supplement in each station.  The fluid was not in a cup, but in a water bottle!  I took a bottle, drank, threw it in my jersey and traded it in at the next station.  Pro-set up for sure.

The second lap was just as fun as the first.  The riders were spread out which made it easier for smoother climbing and downhill maneuverability.  The second lap conditions helped me to have a substantial negative split which is always good.

Considering my lack of acclimation to the altitude I was happy with the results.  Of the 1000 or so racers, I would say that 800+ were from CO.  I was able to out climb the people I was racing with but they killed me on the downhills.  (Photo: Devon Balet)

The cost of registration included a T-shirt, Merino socks and a glass filled with beer along with a full dinner post race!

It was an all out mountain bike event that did not disappoint, great people and atmosphere. Will be on my calendar again for next year.

We received a recap of the Lutsen 99er after last weeks deadline from Jim Newton of Minneapolis and below is his detailed report of the epic event:

Pre-race reports indicated conditions would be wet in the aftermath of all the rain our region had received but I wasn’t prepared for just how wet and muddy things really were. Having ridden in the 2012 99er, I didn’t think things could be worse as that race was held a week after the big rainstorm that caused all the damage in Duluth that year. In terms of race day weather though, riders couldn’t have asked for better weather - with clear skies and temps in the 50’s, it was a beautiful day to be along the North Shore. The starting chute filled up fast ahead of the 7:30am start and the usual mix of tension and high adrenaline filled the air as racers began to get settled into their spots in preparation for a beautiful rendition of the National Anthem. The crowd of riders was noticeably larger than last year with this event in its third season. Now in my late 40’s, I’ve participated in a lot of events over the years and would rank the start of this race as having the most gorgeous backdrop. The beauty of the natural surroundings extends past the start, all the way through the 99 mile course, which probably comes as no surprise to anyone that has spent time in the Lutsen-Grand Marais area at this time of the year.

The roll out of the start was a fast one with the lead car and race motorcycles keeping the front end of the race to under 40mph as we flew down the road back out to Hwy 61 where we’d head North for a bit before shedding the lead car and beginning the race with the long and steady climb up Caribou Trail. My 16-year old son Zach had gotten himself a spot in the front row at the start and so I found myself winding my way through the mix of 39er and 99er riders to make my way up to him. I enjoyed the opportunity to chat with him as we rode along 61 with the front-end of the pack at a comfortable but fast pace. We eventually parted ways on the upper portion of Caribou as the 39er riders continued up the road while those of us on the 99 mile excursion peeled off onto one of the many forest service roads we’d be riding that day.

The Lutsen 99er has a substantial amount of forest roads, logging roads and full sized dirt roads as part of the course. Organizers also work in a mix of snowmobile trails along with a couple of shorter single and double track sections to stitch everything together into one cohesive route. The course is exceptionally well marked and the aid/food stations are among the best supported I’ve seen. In addition to the abundant food and drink, their volunteers were everywhere making sure people were headed in the right direction, locating their drop bags, etc. 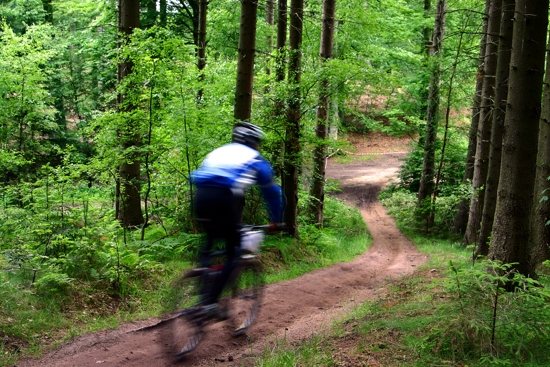 The dirt road portions were fast paced with several riders working together in packs to take advantage of draft opportunities. Following the completion of two laps of a roughly 20 mile loop deep in the woods outside Grand Marais, and having completed about 60 miles in total, riders begin to make their way back towards Lutsen. The forest/logging road that racers have to navigate was marred by water hole after water hole; several areas were thick with mud that made picking and holding your line both challenging and critical to clearing each of these spots intact. The final section of forest road proved to be the muddiest, with several long sections of standing water and thick cement-like mud – as in 5-6” deep. My race pace slowed considerably here and I could feel the minutes ticking by as I navigated the final few miles of the day. Finally, I heard the race announcer off in the distance and knew the agony of today’s ride was near an end. But it wasn’t over yet as the next portion of trail included several sections of nasty slick mud and tree roots jutting out in all directions, bringing my pace to a near standstill just in an attempt to stay upright. With that section cleared, I was on to the final climb up a bear of a hill from the basin of the Lutsen ski hill and leading through a crowd of cheering onlookers to the hilltop finish line and into the arms of my awaiting son. He had finished his 39 mile course hours ago but waited dutifully for his dad to finally emerge; I can look back on it now and say it was indeed an epic day on my bike.  (Photo: Lutsen 99er)

Todd Wells added another national title to his name, taking the the Elite Marathon Nationals win last weekend in Sun Valley, ID. Pua Mata took the female title as both riders repeated from their victories the year before.

The Cyclists of Gitchi Gummi Shores (COGGS) have been running a Wednesday night enduro series, the popular Super D like racing format featuring more up and down. In order to participate, you must be a member of COGGS. 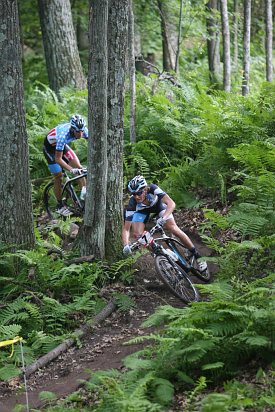 The big Subaru WORS PRO XCT event take place this weekend and is undoubtedly the biggest event in the Midwest as far as the caliber of competition. The venue has drawn great reviews from Pros alike and a nice showcase of the largest mountain bike series in the Midwest, WORS.  (Photo: WORS)

The Minnesota Mountain Bike Series heads north to Duluth for the Great Hawk Chase, racing on the mountain bike trails at Lester Park. Trail crews have been busy the past few weeks readying the course for race #5. A nice mix of climbing, sweet flowing singletrack and the Lester river running through the park to cool down in after the race. Be careful of the current!

The countdown is on to the 2013 US Cross Country Mountain Bike Nationals on July 19-21, and organizers have been busy preparing the course for the thousand-plus racers expected. As in recent years, the elite riders will race a shorter course than the amateurs. With nationals making its first trip back east since 2008, racers can expect very different course and weather conditions from the past four years in Colorado and Idaho. Rocks, roots and plenty of heat and humidity are in the forecast. A handful of Midwest riders are set to compete against the nations best.   Read a full report on Cyclingnews.