This weeks report includes a full recap from the Laddies Loppet weekend and a look ahead to the first full weekend in September!

Another Laddies Loppet in the book. Not sure why, but I reflected back on the years a bit more this year, 23 in all. The first year was a 8 mile loop with a one lap or two lap option. We had a full range of riders from hybrid bikes to hard core racer types with the latest and greatest in technology. Back in 1990, there wasn't anything too complicated like it is today as mountain biking was just hitting the ground... but very much off and running. Every year has been unique and special in its own way and this year was no different. This was the 8th year of running the stage race format. A timed trial Saturday morning followed by exciting short track action in the afternoon. Sunday was the Minnesota series event, the cross country race. In between the racing, riders staying at the resort did a lot of swimming, lake jumping, dirt and pump track riding, eating and relaxing.  Sunday evening at the bonfire, the kids enjoyed a keg of root beer provided by the Maplelag owners while adults sipped an appropriate tapped Fat Tire. We have been fortunate at Maplelag to have such a loyal base of repeat customers which makes us look forward to the event each year, catching up on the wonderful folks who come to visit. 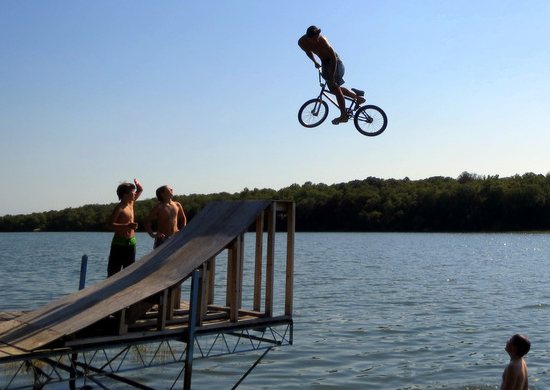 A cool breeze filtered through the woods early Saturday morning as I taped off the intersections for the time trial. A 2.5mile loop consisting of ski trail and some fast mostly descending sections of singletrack awaited the riders for a 10:30 start. The course was slightly shorter this year with a tad more singletrack added. Warm and dry conditions would warrant a fast race and the riders did not disappoint. The elite riders were off the line first with Brendan More and Jeff Hall being the

only two riders to record a sub 9 minute time. Moore edged Hall by just three seconds to take the win in the men's event. Catching my attention in the time trial was Samuel Olson's sub 10 minute time of 9:58, which would of put him in the top 15 of the elite category and Jordan Horner's time of 11:36 which would of put her in second in the Elite women which was won by Sara Kylander-Johnson in 10:25. 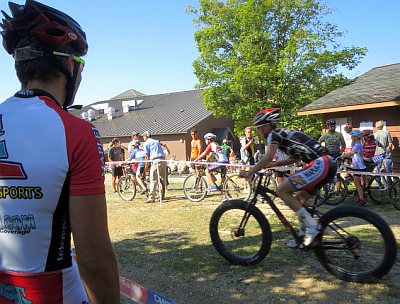 Despite the short time of racing, many riders commenting on how hard it was and recognizing a lack of "warming up" was hard to get to the high gear before the race was finished. Personally, the highlight for me in the time trial was was watching three of my sons compete as I was able to catch a photo of Jens staging, Jon finishing and Jake watching on the other side.

The short track is the event I most look forward to on the weekend. From Kids Comp to the Elites, there are great battles from the top to bottom and this year was no exception, especially in the elite men race. The course weaved around the Maplelag grounds and ski trail-heads, featuring all doubletrack type trail including a run in to the "back bowl"  and a steep punchy climb that riders would try to make a move to get around riders. Thirty minutes before the start of the short track, a dark black cloud to the north sent streaks of lighting from the sky. A check of the radar saw a movement of the system from west to east and it looked like we would be in the clear for a dry short track race. The system shifted just a tad south, resulting in the a short shower during the Kids Comp race. The rain was nice to settle the dust but made for a slippery few corners as some kids found out but were all laughs as they slide out safely on a grassy turn. The highlight of the short track was the men elites, the last race in the day.

The race saw almost the entire field of 30 riders together the first few laps before the groups were selected that would stick together until the last lap. A lead group of 6 consisting of Brendan Moore, Jeff Hall, Scotty Kylander-Johnson, Mason Bacso and Rick Erickson would break free from a chase group of team Hollywood riders, Devin Curran, Jay Henderson, and Josh Bauer with Jake Richards sandwiched in between. The third group was a large group of 7-8 riders that also remained together until the last lap. Going through the start finish area on the last lap, the front group of six screamed through setting up for an exciting finish. Comment from the crowd expected a sprint finish between Moore and Hall with Fred Mills the wild card and his strong cyclecross skills. As the riders weaved up and down the back side, Moore would get the right line going in to the finishing straightaway and take another win on the weekend. After the race, Moore commented he didn't know it was the last lap until halfway through, racing by the lap counter to fast to see how many laps remained. Finishing out the top five for the cash spots were Mills, Kylander-Johnson, and Bacso. The display of bike handling skills was most impressive as riders snaked down the ridge keeping upright through the loose dirt corners.

A shout out is in order to Denny Barry who upon hearing there were a few trees coming down on the course from a busy beaver Saturday morning, asking not if he should go out and saw up the trees but instead said "where is the chain saw". Denny got a helping hand from Gary Smith.Should also be noted that Denny blew out the east side singletrack Friday afternoon to provide a debris and derailer busting free track . Thanks guys!

A big change in weather overnight saw completely different conditions from Saturday as a hard 30 minute rain shower during supper followed by the passing of a cold front made for an ideal racing scenario for Sunday morning. Early morning I was out on course riding, taping intersections and inspecting key sections to see if they were muddy and if any course altering was in order. No change in course was needed after getting lost in thought for a few minutes enjoying the incredible riding surface which would greet riders on the day. A light mist was falling but with the thick maple canopy, very little was making its way to the forest floor. Despite clear skies 30 miles to the west, the clouds stuck around and combined with temps not much above 60, most riders agreed the racing conditions could not be any better.

The highlight of the day was seeing the start of the Kids Comp race. I had a few nephews join my son, Jens, which was great to see but the field of almost 50 riders, the largest in the series so far this year, was awesome. It was one mass start and Henry Hall made it a sweep on the weekend, bolting to the front and never looking back. Zoe Camp was the top female rider. We started the Kids Comp at Maplelag 7-8 years ago and was pleased to see the series jump on board a year later with this added class. With high school mountain bike racing exploding in Minnesota, it is very exciting to see the youth movement right now. Like I said before, there are enough concerned individuals to make the the distances keep the kids interested and fast to make faster riders versus long courses that make slower riders, in my opinion.

The Elite and Comp races had a bit different start than the earlier racers, which was a prologue loop before the lakeside drops including a short loop on the short track course before a b-line to the lakeside drops. A little grumbling beforehand but I pointed out the race would be plenty long to sort things out. As expected, Brendan Moore and Jeff Hall broke away from the main group early to dice it out the entire race. Hall put in effort on the twin lakes singletrack section but Moore was able to match his pace and on the run in to the finish which was fast doubletrack, Moore held off Hall to take the xc win as well as the overall. Scott Kylander-Johnson, Mason Bacso and Devin Curran rounded out the top five. Sara Kylander-Johnson also made it a sweep on the weekend taking the win and taking the overall stage race win.

Other cross country highlights included Jordan Horner taking her 6th consecutive Sport win and Samuel Olson rolling his big wheels to take the win in Sport among four riders 18 and under in the top four and post a time in his full lap that was just a few minutes behind Jeff Hall and Brendan Moore! X-Games gold medalist Tucker Hibbert hit up the cross country in the Comp class to take a nice 6th place overall.

Big thanks to Bruce for the coverage on skinnyski.com (id links) and to the racers, volunteers, sponsors and Maplelag staff for making it one of the best weekends I can remember! 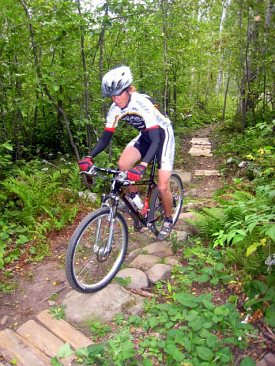 Race director Tim Kennedy confirms a challenge indeed on tap for racers competing near Grand Marais. A big long climb with ski trail on the Pincushion trail network with new singletrack opened just last week sprinkled in to the course. I remember racing the first races back in the early 90's held on the Pincushion and National Forest land and was some of the best racing and riding I remember. Wish I could head up there. Tim also reports plans are to add more singletrack for the future with up to 25 miles the next five years planned. 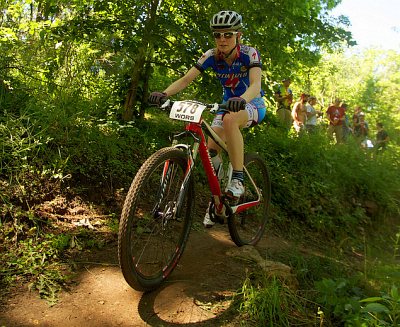