The 2014 edition of the Minnesota State Meet exceeded expectations, providing some big surprises and remarkable performances.

As we've come to expect this season, Mother Nature played a role.  At Giants Ridge, that role is usually cold weather.  But this year, while the temperatures were quite reasonable, a blanket of fresh snow, upwards of 6" overnight, and more falling off and on throughout the day, resulted in soft conditions for most of the races.

As expected, Zak Ketterson, Bloomington Jefferson, proved to be just a little too much for the boys field - but it was not a cakewalk.  Ketterson posted the top skate time, but only the seventh fastest classic time, winning the pursuit title by only eight seconds.   The battle for second place was quite a fight, with the nine contenders after the morning skate all finishing within 25 seconds of each other.  Nick Gardner, MPA,  provided the most excitement in the grouping, moving from sixth place after the skate race to catch and then battle Leo Hipp, Forest Lake, right down to the line,  reversing his section loss to take second overall.  Gardner nailed the fastest classic time on the day, and was the only one to go under 16 minutes. 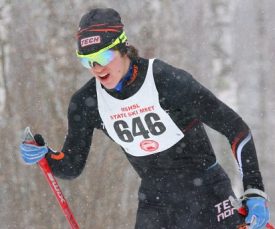 There was no bigger surprise in the boys field than Cory Rouw of St. Cloud Tech.  Rouw, a J2 Junior National competitor last season, had been struggling to show that level of performance this season.  Rouw had been beaten by his own teammate, Isaac Wieber in a number of meets, including their section championship.  Not even on the cusp list of the high school rankings, Rouw hammered out the fourth fastest skate time and second best classic time, just missing the podium by two seconds to finish fourth.  Rouw exemplified the beauty of the State Meet -- that any skier might just have that breakout performance.

The girls race topped the boys event for sheer excitement, and will surely enter State Meet lore.  Mattie Watts, Irondale, surprised the field in the freestyle race, hammering her best performance at that distance all season and grabbing a solid 23 second lead over Burnsville's top ranked Vivian Hett.  Racing after the boys in the afternoon classic pursuit, the girls had to contend with a beaten up track and a fresh coating of snow.   If that wasn't enough, Watts made the challenge significantly more difficult by having to race on a pair of last minute, borrowed classic skis!  Hett charged after Watts, and going into the final kilometer had closed the gap to a few seconds.  Somehow Watts managed to hold off Hett and pulled ahead in the final stretch to win by six seconds.  It had many coaches and parents recalling the tight dual between Jessie Diggins and Anne Hart from a few years ago. But when you add in the factor of winning on a pair of borrowed skis, nearly 20 pounds outside her fit range, it elevates Watts peformance to legendary status. (Read the full story on the borrowed skis.) 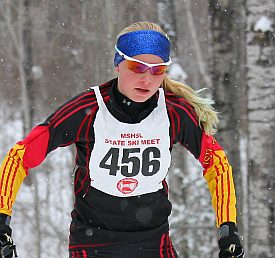 A number of other girls had strong performances on the day, but two rising stars left us already looking toward next year.  Anna French, Wayzata, a junior, and Margie Freed, Eastview, a sophomore, finished 5th and 6th respectively, battling throughout the classic race with seniors Alayna Sonnesyn, Wayzata, and Caroline Brisbois, Roseville.  Allison Ternes, White Bear Lake, should be recognized for posting the top classic time, pulling herself up from 15th to finish 8th.

As exciting as the individual races were, the team titles were marked by a clear dominance by both of the top ranked teams. The Wayzata girls may be one of the best teams ever, with their scoring four finishing in the top 15, to win the title by 35 points.  The battle for second was fierce, as Armstrong-Robbinsdale edged out Stillwater by a single point, with Burnsville just five points back.

The Forest Lake boys were nearly as dominating, winning by 29 points - and not a single senior on their State meet team!  St. Louis Park was the best of the rest, by a single point over Duluth East with Eagan another six points back.

For those that love those deep teams, we crunched the numbers for scoring all seven skiers.  Wayzata would still take the title, but it's the St. Louis Park boys with the strongest seven.

One of the more interesting stats each year is the movement number - how much a skier changes their position from the skate race to the pursuit finish.  Looking at the top 30, Kethan Dahlberg, MPA, leaped from 44th to finish 26th, an 18 position move up!  Seth Prigge, Ely, went from 25th to 16th, and Sam Boardman, East Ridge, snagged the final All-State position by moving from 33rd to 25th.

For the gals, Maddie McKeefry, Andover, strided up the field, going from 48th to 29th, an amazing 19 point jump!  Vessa Pearsall, Stillwater, came back from 38th to 22nd, and Anna Johnson, Mesabi East, moved from 23rd up to 15th.

Grabbing the young gun titles was a pair of freshman:  Erin Moening, Highland Park, rocked an 11th place finish and Patrick Acton, Eagan, was the best of the incoming boys class finishing 51st.

So how'd we fair on the predictions?  The boys race was very solid -- we scored a trifecta, getting the podium order exactly right.  The girls field was tougher.  While we had Watts and Hett in the top three, Watts upset the cart with her first place finish, and Sonnesyn busted into the top trio.  Not surprising, given the enormous talent of this U18 girls field.

For the teams, we got the winners right, but Armstrong and Stillwater girls swapped positions, and St. Louis Park replaced our pick of Eagan in the second position with Duluth East third, as predicted.  Not bad, considering the tight battles for second place!

While the high school racing season has wrapped up, tune back in the first week of March to see how many of these stars shine when they compete at the Junior Nationals in Stowe, VT.