A recap of our 2014 Junior Nationals coverage...

February 26, 2014
Hard to believe, but Junior Nationals competition starts up next Monday at the Trappe Family Lodge in Stowe, VT. We've got a breakdown on the events and a look at the 2014 Midwest Junior National squad. Check back for on-site coverage all next week!

Course Preview: 5K
A preview of the 5K course used for both the classic and freestyle distance races.

March 5, 2014
It was an outstanding morning for Midwest athletes at Junior Nationals in Stowe as classic sprint qualifying heats wrapped up. The top 30 athletes from each age division advanced to afternoon quarterfinals and included a large contingent of Midwest team athletes (over 30 skiers). Noteworthy morning results: Zak Ketterson: 5th fastest MU18 qualifier, Luke Brown: 9th best MU20 time, Amanda Kautzer: 5th fastest FU16 qualifier, and Mattie Watts: top FU18 qualifying time of the morning. Skiing through quarterfinals and semis brought a select group to the top of the heap, including Amanda Kautzer 1st overall for FU16 girls, Zak Ketterson 5th overall MU18, and Kris Bourne 5th overall FU20. Mattie Watts and Vivian Hett went 2-3 in the FU18 final with Sarah Bezdicek bringing home another 5th place for the Midwest Team. Results linked in, along with big photosets of the Midwest skiers and video recaps of all the A finals.

March 7, 2014
Friday's mass start freestyle races in Stowe for the 2014 Junior Nationals showed some great Midwest team results. Tom Bye skied up from 11th position to snag the 3rd U20 finish and the 2nd American in the 15k. Matt Nichols and Jan Ketterson finished 5th and 7th. Kris Bourne finished 4th in the girls U20 10k with teammates Nora Gilbertson, Sonja Hedblom and Maria Hauer claiming 7th, 8th and 9th. Ian Torchia represented the Midwest on the podium with 3rd in the boys U18 10k skate. Zak Ketterson claimed 7th. Midwest U18 women were dominant in the 10k skate, with Vivian Hett claiming 3rd place, and teammates Caroline Brisbois finishing 5th, Rocci Wohlk 6th, Alayna Sonnesyn 7th, and Mattie Watts 9th. Wrapping up the U16 classes, Anders Sonnesyn had the best Midwest boys 5k time in 15th place while Erin Moening finished 9th for the girls. Results linked in, along with big photosets from all the races.

March 8, 2014
Junior Nationals in Stowe, VT, wrapped up on Saturday with the 3X3K freestyle relay events. The Midwest team finished the week strong, especially in the U18 division where the girls collected 2nd and 3rd and the boys 3rd and 6th. The U20 gals also snagged a podium spot with Kris Bourne anchoring the victory by a boot throw. Tom Bye nearly pulled his U20 team onto the podium as well, finishing 4th by less than a second. Other top results: U16 girls nail down 5th, boys 9th and Nicole Schneider racing up with the U20s helped secure an excellent 5th showing. Results linked in, video recaps of most of the races, and a few post-race photos added. 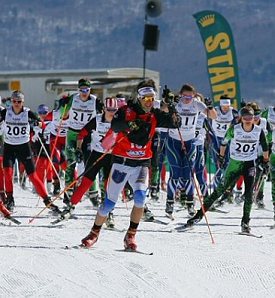 The Junior National races used the same opening segment for all the events.   This featured a flat start area, which quickly turned to the left and drived into a downhill banked 180 turn.   While this was very negotiable for individual starts and sprint heats, it proved to be a problem area for the mass start events, as the opening U20 race field had some pretty serious crashes.  Organizers scrambled and quickly implemented a cycling-like lead out, where a skier (Jeremy Hecker from the Midwest) would led the start field in a paced, non-racing ski through the opening curve and part way up the first climb then would drop out to allow racing to begin.   Even with the lead out, there was another crash during the U16 boys field start.

For the relays, a couple of changes were made to reduce this problem.  First, they broke the relay fields into six events, instead of the traditional four (usually U18/U20 fields are combined).  Second, they extended the start area, and that, combined with the smaller field sizes, allowed for a safer passage through the opening downhill curve.

This year at Junior Nationals they switched to a new "lucky loser" format for selecting sprint heat advancement.  In the past, the lucky losers were advanced based on their qualifying placement.  This year they changed to the more common practice of using the fastest heat times for selection.

A couple of interesting timing notes, gathered from John Burke (of Performance Timing in Wisconsin), who assisted the lead crew of Summit Timing (Ernie Page). 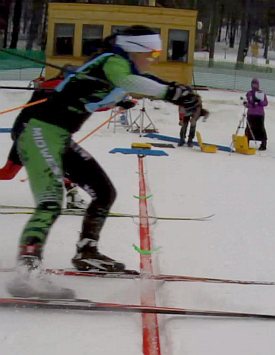 The mass start races (freestyle distance and relays) generated a fair amount of broken poles.  In general, the Midwest skiers received replacement poles quite quickly, though they once in a while needed to swap to get the "right" pole.

Kris Bourne had quite the excitement in her two mass start races.  In the freestyle distance race, she fell multiple times in the first lap, but was able to rejoin the lead group and eventually finished 5th.   In the relay race, the U20 gals featured Nora Gilbertson moving the team up from 10th to 5th, and then Bourne taking it from 5th to finish 3rd in a boot throw that had to be reviewed by camera to before the placing was finally posted.  (Photos of the finish security cameras are posted in the relay coverage.)

The Midwest team has a number of traditional events during Junior Nationals.   One of them, started roughly 5-6 years ago, is the date-ski.  The date-ski involves one of the senior team members pairing up boys and girls for a "date" on skis during a morning practice session.   The pairings frequently involve older skiers with younger ones, and this year even a few trios (because of the smaller number of boys).  The pairings are suppose to ski at least one lap together, and attempt to learn more about each other.  Many of the skiers, especially the veterans, dress up for the event.  It's been one of the highlights of the trip, and a great way to meet new teammates.

Another tradition for the Midwest skiers is hair dying.  For the girls, it usually involves red or pink hair dye (including bleaching for dark hair).  Usually the older girls help lead the effort, and over the years have developed preferences for specific brands of hair dye and materials.   Some guys also get involved, although the outcome can be a bit unpredictable (some guys got a little more bleaching than expected!).

Photos from both the date-ski and hair dying process are in the Junior Nationals Trip photo album.

One of the final day traditions is the team awards.  The night before, the team votes on candidates for the awards, and then they are announced, usually after the final race and when everyone has packed up.   This year's award winners were - Team Captains: Kris Bourne and Tom Bye; MVP: Vivian Hett and Zak Ketterson; Rookie of the Year: Claire Benton and Nick Gardner; Spirit of the Midwest: Mattie Watts and Luke Brown.

The 2015 Junior Nationals will be hosted by the Auburn Ski Club, based out of Soda Springs, California, March 8-14.  They have a preliminary website up and have begun their Facebook campaign.

Finally, we want to say a huge thanks to all that helped make the trip possible for us.  The Midwest Junior National Commitee, Maplelag Resort, and many parents and coaches provided donations and resources to help get us there and cover the costs.  Without their generous support, we simply would not have been able to make the trip -- Thank You!