February 8, 2010
It seems like this ski season has flown by, all the more so as the State Meet is a week earlier than normal this season, situated before the Mora Vasaloppet instead of the Minnesota Finlandia weekend.  And with the recent snowfall, its really a shame the high school racing season ends so early.

As with almost every year, there are some changes in store at the State Meet again.  Actually, its more of revival than an upheavel, as the meet format reverts back to the one used for most of the last five or six years: individual freestyle racing on the Silver trail in the morning, classical pursuit on the Cedar/Gold trails in the afternoon.  The classical course is a little different, but we can't see the changes making a big difference in the overall winners. 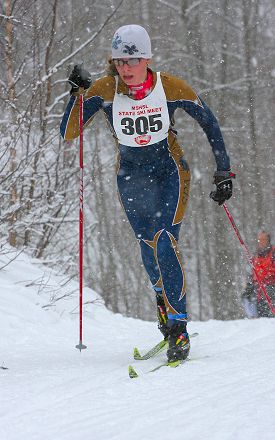 Barring some unforeseen circumstances, the top two on the podium come Thursday should be Jessie Diggins, Stillwater, and Annie Hart, St. Paul Academy and Summit School.  These two are former State Champions and have proven to be on top of their field not just locally, but nationally and internationally, with Diggins and Hart competing at the World Junior Championships at the end of January.  While Hart is the defending State Champion and has been dubbed the classic queen, Diggins' pure horsepower puts her as the odds on favorite to be on the top of the results.

After those two, the field is wide open and should make for an exciting battle for third.  The likes of Paige Schember, Wayzata, Marian Lund, Duluth East, Kathryn Van Every, Ely, Jen Rolfes, Edina, and Liz Peterson, Forest Lake, are just some of the names in the running. 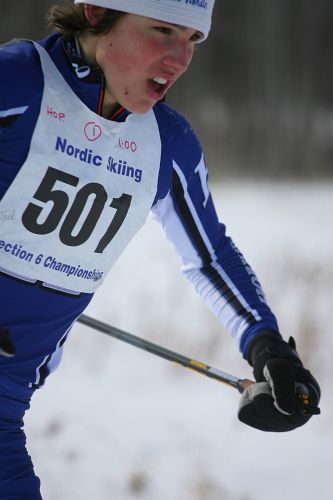 Again this season there is no clear favorite for the boys field.  Ben Ohman, Orono, has been number one ranked much of the way, but there are plenty that will contest that claim.  Two at the very front of the pack are Hopkins superstar Jack Hinkens and Cloquet-Esko-Carlton's Raleigh Goessling.  Hinkens has an unbelievable engine, racing among the nation's top juniors in mountain biking and rapidly rising in the Nordic world in just a few seasons.  At the Theodore Wirth JOQ races in January, Hinkens crushed the likes of Ben Ohman and Andy Dodds in skate (but came up short against Ohman in classic).  Goessling has been a bit of a Rodney Dangerfield -- the kid doesn't seem to get the respect he deserves.  All it takes is to look at the 2009 State Meet results:  Goessling was second overall.  If anyone can come from behind in the classical pursuit, Goessling would be the one.

Our pick is Jack Hinkens topping the freestyle field and with that lead going into the classical, we don't see anyone making major position changes in the afternoon - Hinkens as the new state champ.

However, you can bet Steve Coozennoy, Forest Lake, Ben Ohman, and Andy Dodds, Apple Valley, will have something to say about it and could very well pop the epic race in the morning.

Stillwater is our choice to top the girls team line up.  Stillwater survived a close challenge from  top ranked Roseville to win their section.  But after Stillwater, the field is pretty much wide open with any of the seven other teams having a solid chance for second and maybe even a possible upset.

This one is a rematch of 2009 between Forest Lake and Hopkins.  While both teams lost a vital senior or two, the current members have stepped it up to ensure the teams haven't missed a beat.  The battle will come down not to the top skiers, but the number three and four skiers.  Forest Lake appears to own the depth chart again, so we're putting the target on their back as the favorite.  Watch for the tough Wayzata boys and scrappy Minneapolis South to be on the podium as well.

You've heard our take, now what's yours?   Email your comments/predictions to

by 11 pm Tuesday and we'll post a sampling for Wednesday.

MSHSL State Meet Preview Press Release
About Us | Advertising Information | Privacy Statement | This service provided to you according to our Visitor Agreement
© 2021 skinnyski.com. All Rights Reserved.