June 28, 2022
The last weekend of June saw riders flock to the North Shore for the Lutsen 99er, the spotlight of this week's Midwest MTB report. A quick update from Jay Richards delivers coverage of the race from the perspective of both the women's and men's champions, as well as updates from an Alexandria rider taking on the Tour Divide, and highlights from the opening ceremony for new trail at Cayuna.

June 27, 2022
Water Water - Cleveland Clinic provides advice on best time to drink water in the evenings.
Workout Appetite - NYTimes highlights a recent study that delves into why hard workouts might suppress your appetite.
Interval Recovery - Outside Magazine looks at the differences between completely resting and jogging between workout intervals.
Covid de France - Covid cases during the Tour de Suisse, a Tour de France warmup, have teams nervous for the big Tour.
Whycups? - Washington Post attempts to explain hiccups, and how to stop them.
Tick Rise - Tick season appears to be delayed this year, though the deer tick population may be lower. 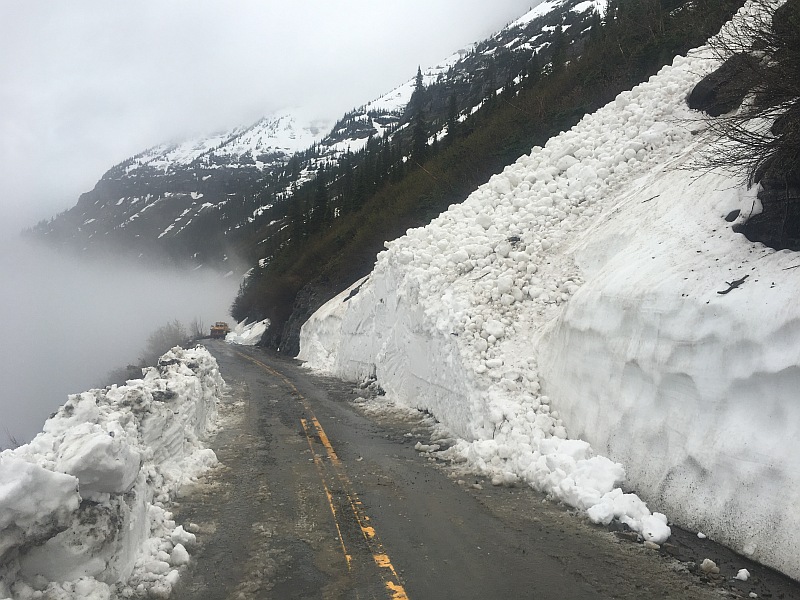 Snow: Going to the Sun Road at Glacier National Still Closed Due to Snow

June 27, 2022
National Park Officials say snowstorms have slowed progress on clearing the famous Going to the Sun Road at Glacier National Park. Officials do not believe the road will be cleared before the July 4th weekend.

June 26, 2022
The 2022 John Hugus Leadership Award winner is Mike Abbott, of the Michigan Technological University (MTU) community. Abbott was one of the pioneers of the project that brought 60k of beautiful MTU trails and facilities into existence, and has been integrated in all aspects of sport development, implementation, and accessibility at MTU.

June 23, 2022
And just like that, we're officially past the solstice and into summer. Aligning with the longest days of the year are some of the longest races of the year as this week's Midwest MTB report covers both the Chequamegon 100 and Epic Bike Fest that took place these past few weeks, and also looks ahead to the Lutsen 99er happening this weekend. Included as well: clinics, camps, and more; all courtesy of Jay Richards.

June 21, 2022
Madshus athlete Edvin Anger, a 20-year-old Swede who is entering his first season at the senior level, is the youngest skier in history to receive the Sixten Jernberg Award. In the sprint race at the 2022 Swedish national championships, Anger won the qualifier and every subsequent heat before winning the final by four seconds. He thereby became the first ever junior racer to win a national championship title in the men’s category.

June 18, 2022
As part of the Worldloppet Annual General Meeting, this year held in-person in Mora, Sweden, it has been announced that Russian (and Belarus) athletes will be barred from Worldloppet events, and the Demino Skimarathon has been suspended as a Worldloppet series event. The American Birkebeiner and the Gatineau Loppet are both Worldloppet events.

June 16, 2022
Ski Hut has a number of mountain bike clinics this summer. The first one is this Sunday, June 19th, and features mountain bike skills for women.

Olympics: Nordic Combined May Be Cut From 2026 Winter Games

June 16, 2022
Nordic Combined could be dropped from the Winter Olympic Games as one possible outcome of resolving gender equity issues. It is the only Olympic sport without women and the International Olympic Committee (IOC) is due to make a decision soon about whether to allow women to compete in Nordic combined at the 2026 Milan-Cortina d’Ampezzo Games. Men in Nordic combined have been publicly pushing on social media and elsewhere for women to be included.

June 12, 2022
Just over a month after the lakes and rivers thawed out in Cass Lake, the Chippewa Triathlon took place on Sunday, drawing in a sizeable crowd from across the Midwest. Chris Godwin and Deanne Hart were the fastest finishers in the solo category, while John Kallemeyn and Maria Janowiak retained their titles from the previous year in the doubles category. First place in the 2-4 person relay went to the Michigan Paddlers, Ryan Harris and Jim Harwood.

June 6, 2022
The famous Beartooth Hwy running between Cooke City and Red Lodge, Montana, had to close again over Memorial Day weekend after more than four feet of snowfall. Some epic photos of snow clearing operations.

June 6, 2022
US Biathlon featured Minnesota native Leif Nordgren and his storied career, along with his plans for the future, in a recent podcast.

June 5, 2022
Altitude Training - Zak Ketterson writes a guide to altitude training as he heads out west for a training block with Team Birkie.
April Adventures - Alayna Sonnesyn recaps a whirlwind post-season vacation, hitting Jamaica and Europe before getting back on the skis in Bend, OR.
Recap and Reflections - Michaela Keller-Miller recaps the second half of her season, including the big races at the Birkie and up in Whistler.
Back to Square One - Top junior Greta Hansen shares some of a brief history with Nordic skiing, including overcoming a serious medical issue.
Tech to the Stars - Chris Hecker covers his season as wax tech for the US Ski Team.

June 2, 2022
U.S. Ski & Snowboard announces that Kristen Bourne, a Twin Cities native, will join the U.S. Cross Country Ski Team staff as D-Team coach. Bourne, who has worked with the team on several projects as a ski technician and coach, replaces Kate Johnson, who coached the D-Team for the past two seasons.

June 2, 2022
The American Birkebeiner Ski Foundation is seeking candidates for the role of Marketing/Communications Director (MarCom). The MarCom Director is responsible for all external communications, providing communications and branding leadership and strategies, message and delivery management, content and branding development and management – for all Birkie brands and entities. Application deadline is June 15th.
About Us | Advertising Information | Privacy Statement | This service provided to you according to our Visitor Agreement
© 2022 skinnyski.com. All Rights Reserved.