A Legend Is Born

Someday, perhaps in the very near future, some coach will tell their skiers, "Don't complain about the kick wax... did you ever hear the story of how Mattie Watts won the State Meet!?"

If you haven't heard by now, Mattie Watts of Irondale high school, won the Minnesota State High School Championship on borrowed equipment!  An amazing feat, not to just race but to be competitive skiing on borrowed equipment, right?  But the whole story is so much bigger...

We sat down with the Watts family to get the narrative from Mattie and her parents, Cindy and Kevin.

Winding the clock back, we start at about 15 minutes before the race start.  Endurance United-Sisu assistant coach Jeremy Hecker has just finished putting the final touches on Mattie Watts top of the line Fischer Speedmax classic skis.  Mattie has already been out testing the skis and working with Jeremy to fine tune the kick wax.  The skis are now race ready, and as with most top juniors, they won't ski on them any more until the start of the race.  She walks down the Laurentian trail near the timing building, where Hecker has been brushing out the skis, and runs into her father Kevin.  She hands her race skis to her father, saying something to the effect of "put these over by the building" (meaning the timing building, so she can grab them for the race start).  She then heads out for a final warm up on a backup pair of Atomic classic skis, which have not prepped for today.

Kevin Watts, like any proud father, is her biggest fan.  He collects his own video clips and photos from the races, Like's all her Facebook photos, and is one of the loudest voices on the trail.  Kevin makes the assumption that the pair of skis just handed to him are Mattie's training skis, and that she has race skis by the start area.   He has already staked out his viewing locations to catch the start and finish of the race, including making a path through the deep snow down from Laurentian to the fencing along the finish area.  He marks this path with Mattie's skis by placing them in the snowbank, about 50 yards up the trail from the timing building and start area.

Cindy Watts has already giving her best wishes to Mattie and begun her hike out the trail to watch her daughter in the opening kilometer.

Mattie Watts finishes her warm up, stows her training skis and heads over to the start area.  The girls are beginning to line up in order.  Mattie looks for her race skis and after some extensive searching, can't locate them.  Since she has already entered the start area, race rules state she can not leave (and thus can't run around to look for her skis).  Enter into the picture one of the Watt's good friends, John Richter, whose son Tamer Mische-Richter had just finished 5th overall - a terrific result.  Tamer is a member of the Endurance United-Sisu training group, and as such the families have known each other for years.  John Richter has frequently been a great "lieutenant" with the training group, helping with training sessions and joining many of their training camps.  Richter comes to Mattie's aid, and begins a search for the missing skis.   Mattie, who rightly is beginning to panic, talks with the race officials.  She requests they simple ask over the public announcement system to have her dad come to the start (hopefully with her race skis).   The actual announcement becomes something close to "Mr. Kevin Watts, please report to the start area, the first place skier needs her skis!".

With less than five minutes to the start of the race clock, the panic level is growing rapidly.  Richter decides to start hunting for another pair of skis.  Tamer's equipment might be a good match, but unfortunately, its the wrong binding system for Mattie's boots.   Richter remembers that another friend, Marshal Landrum of Como Park, said his skis were very  fast for the classic race.  Marshal is located and he hustles to retrieve his classic skis, a pair of Peltonen Infra-X classic, getting them to Mattie with three minutes before the clock start.

With roughly two minutes till clock start, Richter places a phone call to Cindy Watts, explaining the situation, including the backup skis from Marshal, and hoping she can locate Kevin.   At this point, Cindy is out nearly a kilometer on the trail.  Kevin is positioned himself up on the Laurentian trail and can actually see the start area.  As fate would have it, he can't hear the announcements, in part because the speakers are pointing away from him, but also due to noise from fans along the course.  He recalls wishing it was quieter, so he could hear the announcements about the race start.  Cindy Watts attempts to call Kevin but again, fate steps in - Kevin has decided to ignore his cell phone as he has been getting a number of work-related calls and the race is about to start, which he is planning to film.

All of the top skiers, except for Mattie, are lined up for the start with just a few minutes to go.  Mattie recalls closing her eyes, trying to calm herself and hoping that when she reopens them, her skis will be there.  Fourty-five seconds later, she opens her eyes, grabs Marshal Landrum's skis and goes to the front of the line.  She clicks into the skis and readies herself as the race clock starts - one minute before she will go out.  Meanwhile, her father is lined up and ready to hit the record button while her mother is distraught, knowing her daughter is about to race against the number one ranked Vivian Hett on a pair of borrowed skis... 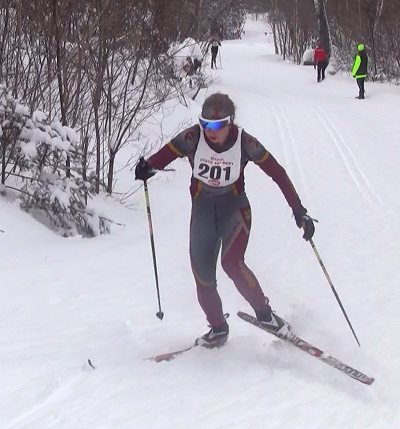 Mattie says she decided no matter what, she was going to give it her best shot.  She blasts out of the start zone, most likely with an extra shot of adrenaline. Her dad films her racing out of the start area.

Around the 1K mark of the race, she realizes Hett has not caught her yet, and that she might actually have a shot at winning the race!  Hett is making progress behind her as both skiers plow through a soft course, enduring mushy uphills after the boys race and additional snowfall.

A number of people later recall noticing the skis on Mattie were not her normal pair, but don't give it a lot of thought at the time. Watts actually stumbles to her knees on one of the steep uphills, but quickly gets up.

By the 4K point, Hett has closed the gap down to a handful of seconds.  However, the remaining portion of the course is nearly all downhill, and Mattie turns into a double-poling piston, hammering away down to the stadium to the finish, winning the race by six seconds! 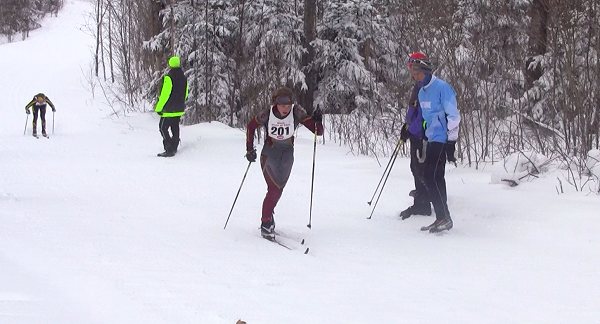 All the agony over the wrong skis is quickly forgiven with the victory.  Mattie celebrates with Marshal afterward, his entire family proud to have contributed to her win.  Marshal even has Mattie autograph his skis!

And with that, a new State Meet legend is born.

Yet there are a few more interesting twists to this story - perhaps call it karma ... 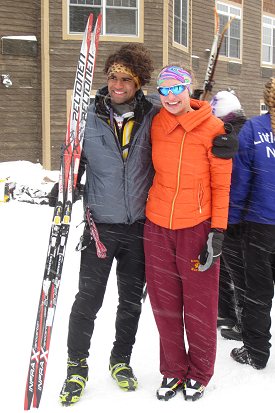 - Marshal Landrum has been a frequent participant in Irondale's summer rollerski sessions, skiing with Mattie and the rest of the team.  In fact, Landrum is treated like one of the teammates, with the Irondale kids cheering him on at their meets.

- Marshal is a good 20 pounds heavier and 4-5" taller than Mattie.  Even with equipment sized and fitted for Marshal's build, Mattie says she was actually able to get some kick out of the skis.

- Jeremy Hecker, who prepared the unused race skis, is the son of Mike Hecker.  Mike Hecker has long been the local rep for Peltonen skis! (What an endorsement!)

- Marshal's winning skis were glide waxed at Finn Sisu by Greg Weier, a few days prior to the race.  The kick wax was applied by Marshal's own dad!

- In discussing among coaches later, a debate has already begun.  Is it possible that Marshal's skis, which had a higher than normal camber for Mattie, might have actually been ideal for double poling through the thick, mushy snow?  Had she raced on her own race skis, would she have been any faster?   As one coach put it, "Mattie would have won racing on 2 by 4's today!"