2018 PyeongChang Winter Olympics Cross-Country Skiing Gold Medalist Jessie Diggins is honored on an I-35 billboard south of Pine City two miles south of MN Hwy #70. The photo on the billboard is of Diggins kissing the trophy she earned by winning the Tour de Ski January 1-10th. Tour de Ski is a series of eight races in ten days at three different venues starting in Val Mustair, Switzerland and ending in Toblach and Val di Fiemme, Italy. 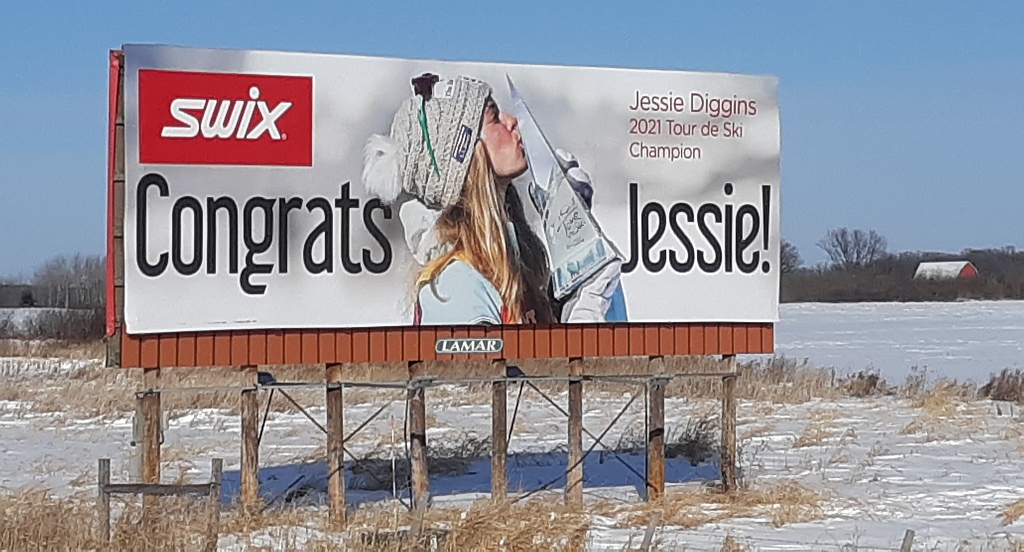 Currently, Diggins, a native of Afton Minnesota and former Minnesota State High School Champion is now leading the World Cup series of races in points towards the crystal globe award for the top women’s Nordic skier of the year in the world.

Chad Salmela, Duluth and former Vasaloppet and Birkebeiner Ski Race announcer will be providing color analysis during the races on these channels. He will also be announcing on these channels for the World Biathlon Championships on February 9 to 21st in Pokljuka, Slovenia. Salmela is the nephew of Terry Salmela of Mora.

The billboard on I-35 is sponsored by SWIX, the Norwegian ski wax and equipment company.