by Jay Richards
May 17, 2011
This weeks report takes a look at the racing action in Wisconsin last weekend including a couple racer reports from the Cable Area Off Road Classic (CAORC) and the RASTA Rally. Plus a look ahead at the season opener in the Minnesota Mountain Bike Series (MNMBS), race #2 in WORS and the crazy Chequemegon 100.
CAORC
The Cable Classic was the first race for the season for many riders. With patches of snow still being reported the weekend before, the CAMBA trails pretty much saw the first mountain bikers of the season with the running of the point to point race from Lakewoods Resort to Cable. As the forecast was calling for cooler temps and rain showers, many riders waited until race day to decide whether or not to toe the line. The numbers were down a bit but the riders that did show up, were ready to face the challenges on the day.
I made the trek over with my son's Jake and Jack and fellow team member Lars Ellefson. Getting a late start the night before, we opted to stay in Duluth instead of driving all the way to Cable. Checking in to the hotel we witnessed a first time occurrence with the receptionist giving us a free upgrade because we had bikes! I was expecting "those can't come in here". Sweet! We woke up Saturday morning to steady rain but a quick check of the radar saw the precip moving generally away from the Cable area. With temps in the upper 30's, I said I would not be surprised if a few flakes of snow came down! 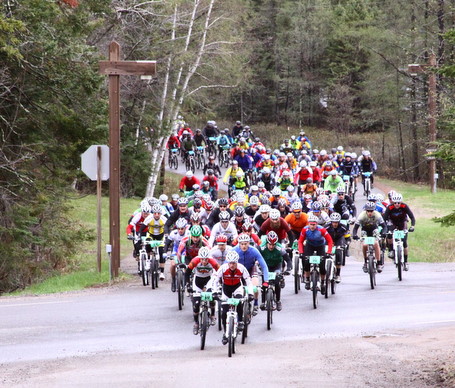 Upon arriving at Lakewoods Resort, the first person I saw was Mr Fatman himself, race director for the mighty Chequamegon, Gary Crandall. Gary was as excited as I was to see the riders kitted up and ready to take on the day. The wind was kicking nicely from the northeast with off and on showers. I bumped into many familiar faces and riders I would expect to see at a race regardless of the conditions. One of the riders, Scott Kylander-Johnson, commented: "races like these I bring all my winter clothes, expecting temps in the 20's, upper 30's, this feels warm".
With the singing of the national anthem, the riders quickly warmed up catching a nice tail wind and feeding off the energy of the pack. Jack and I were just up the hill from the start to catch the action. However, once the race turned deep into the woods and riders encountered the water puddles, keeping warm was the theme of the day. Another challenge presented to riders was keeping on track. Like other years, there have been riders missing turns with the huge network of trails in the area. The general consensus, however, is that as long as everyone makes it to the finish, the chance to ride some sweet trails and get some good training, makes it "all good".
After watching the second start of the day, we made our way to a checkpoint to watch the riders come through. I was doing feeds for a few riders and when a group of seven, led by Scott Kylander-Johnson and fellow team members Brendan Moore and Todd McFadden, I was caught a bit off guard, making for a bit of confusion, but everything got sorted out and riders were back on their way to tackle on the tight and twisty.
Catching a handful of the riders, we made our way to downtown Cable to watch the finishers. Brendan made a move later in the race to put on a gap and solo in for the win. Todd and Scott battled for second with Todd taking the second spot. Sara Kylander-Johnson worked with a group of men to take the women's title and finish in the top 20 overall! A nice hot pizza across the street capped off a fun race day and great start to the season.
Fifth place finisher in the 25 mile women's race Alye DeRoma (formely Bohn) provides her race perspective:
Going into the weekend I knew we would be dealing with some sort of wet trails, however I didn't expect the weather to be 40 degrees and raining. The race started off with me longing for more clothes and a shorter distance. However, once we were on course I warmed up pretty quick and just tried to get into a groove for the first race of the year. The beginning of the course and the singletrack throughout wasn't too muddy or wet. The fire roads and ski trails were a different story. There was standing water in some spots about 2 feet deep and as more riders rode through these areas, the muddier it got! With about 11 or so miles to go I slammed on my brakes after almost missing a barely marked left hand turn. Before that I had just been with a group of riders and after that turn I saw no one for about 45 minutes! I thought I was on the wrong trail, but I couldn't have been because the mile markers just kept popping up along the way. That's when I realized that a good portion of the field in front on me must have missed that left hand turn. It ended up that miss tacked on 2.5 miles for those riders to find the correct course. The last 10 or so miles were pretty lonely, and started to get taxing in the last section of single track. Once I popped out of the woods and onto the ski trail I knew there was just a little bit left. I tried to ride in hard, and was happy that the finish line was close. I had been finished for about 10 minutes when the group of lost riders came in. All in all it was a good first race! I ended up 5th for women.  Let's just hope next year is warm and dry!

When I see the word Rasta, I can't help think of Bob Marly and the Wailers, the timeless favorite college artist. But, of course, here on the mountain bike report, RASTA stands for Rhinelander Area Silent Trails Association. The RASTA group hosted a mountain bike event this past weekend on the Washburn Lake trail system. After cold and wet treat on Saturday, the weather turned for the better providing nice conditions on race day.

A handful of riders racing at Cable made the trek to Rhinelander as well. Casey Hildenbrandt reports on his RASTA adventure:

Once again, rode up with Ben Koenig and we were there in an hour.  We arrived and it was nice to feel relaxed and know this race doesn't count for points.  RASTA is a great organization and I enjoy riding and racing on their trails.  Koenig and I warmed up on the trails together and went to the line.  After the leadout before the first part of singletrack I got dropped by Tyler Gauthier, Ben, Seth Lenss, Justin Piontek, and some guy from the 29er crew.

I hit the rough singletrack on the rigid stumpy and was feeling every little bump.  I had used Ben's pump before the race and the numbers must have thrown me off, cause tire pressure was way too hard.  I fell back to probably tenth. My bottle cage came loose and I lost a bottle.  Thanks to Ryan Roesser I got it back and was rolling.  I finally got off the bike and let air out cause I knew it could make up time if I did that.  By then I had been passed by two juniors, Pete Karinen and my 2011 Wausau 24 teammate, Mike Zuiker.  I let out about 5 lbs on each tire, and started going good on the singletrack.  Made my way back up to 6th I think by the finish, but just wasn't the good day.  Learned some lessons and more about the tubeless tire pressure.

Ben won the race with Tyler on a close second.  Justin Piontek finished third.  One junior beat me, Pete Karinen from Michigan on the 29er crew.  Good to see him move up after last year and doing well.

Thanks to RASTA for another awesome race.  It was a little different not having Wayne there, but his legacy will be remembered and passed on.

Here's some news coverage of the race.

The MNMBS fires up this weekend at Harmon Park in Inver Grove Heights with the Freewheel Frolic benefiting MORC. The race course is approximately a 4.6 mile course through the 70 acre Salem Hills Park. The singletrack section of the course runs through a great mix of tight and twisty trees and across wide open rolling hills through the prairies. The trail surface is mostly hard-packed, but there are a few slightly sandy areas. With only a few trail obstacles the course is designed for speed! Very little climbing in the race makes it a good venue for the first time racer.

Rhinelander sees another weekend of mountain bike racing action with WORS #2, the Crystal Lake Classic, heading north to Camp Tesomas (Hanna Venture Base). The camp is located "only minutes north of Rhinelander, where it's set on the shores of Crystal Lake, a beautiful spring fed lake deserving of its name. This pristine setting is perfect for mountain biking with the lake making an excellent choice for cooling  down after a hard ride through the woods".

Like I mentioned in a previous report, there are more and more endurance, epic type of events popping up on the calendar. The Chequemegon 100 is a distinct ride running mostly singletrack in the CAMBA system. A very low key ride in the past, the Cheq 100 is gaining notability but is limited to 150 riders (which filled this year the end of January). The event is non-sanctioned, verified, insured, etc. Organizers state:  "Nobody can be held liable for the validity, safety, accuracy, and more  blah of these directions.  You agree that by starting this ride and following these directions, you are responsible for you, you are on your  own, and you understand the realities of what can happen in the forest during a mountain bike race.  You agree that you are prepared for these risks and take them on your own accord.  All trails, roads, paths, and highways are open to regular traffic, and you must keep your head up and ride alert, and watch out for other users and vehicles." Last year the first rider came across the line in just over 9.5 hours and the last rider came through around 15 hours... some serious mountain bike time in the saddle!
Keep the wheels moving!