This weeks report includes a recap from the Laddies Loppet mountain bike stage race at Maplelag and a look ahead to next weekend as the mighty Chequamegon, the last big remaining mountain bike race for many racers, quickly approaches.

Each Labor day weekend, Maplelag opens the trails for mountain bike racing, playing host to race #9 this year in the Minnesota Mountain Bike series. The Laddies Loppet stage race features racing on both Saturday and Sunday with a time trial Saturday morning followed by the always exciting short track in the afternoon. Sunday is cross country day, and the race that counts as part of the Minnesota series. Citizen and Kid Comp riders tackle on a 3 mile loop including a climb up Suicide Hill (three times for Citizen) and a few short sections of singletrack.  Sport/Comp and Elite riders race on a 10 mile loop including the infamous lakeside drops and the new Twin Lakes singletrack which saw a new bridge built this year acting as a flyover and allowed bike traffic to cross under and access the main loop to finish out the lap.

Thanks to a cool start to August making for pleasant working conditions, we were able to fine tune a lot of the berms on the trails and clean up some rough sections of trail that had weather nicely exposing multiple rocks and roots.  Extremely dry conditions made for crazy fast conditions on both the ski trails and tight and twisty singletrack. Hosting the race is always a highlight to the start of fall and missing out of the racing action earlier this summer, it was great to see the great people that are like one big family. 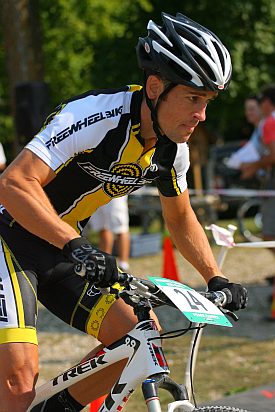 Saturday morning riders were greeted with temps in the 60's, considerably warmer than recent years which saw temps in the upper 30's and lower 40's with the grassy ski trails simmer with morning fog and fresh dew. Not a drop of moisture was to be seen on the course during early morning course inspection making it a slam dunk for new course records to be broken. I asked Brendan Moore if he thought he could break his course record and he said "depends on how much sausage I eat at breakfast". One of the unique things about the weekend is the majority of racers stay at the resort, all meeting up for meal times for all you can eat, home cooked meals as one rider stated, "I don't care how I do in the races, I come for the food!".

As expected, the times were fast with nearly every rider who participated in previous time trials improving on their time. Record times did go down as Moore beat his record by 8 seconds and Pro rider Chloe Woodruff knocked off almost 20 seconds Jenna Rinehart's record set in 2009. Elite riders rolled out first with Kids Comp bringing up the rear to provide a clean course as possible for all participants.

After a lunch of home made chicken noodle soup and fresh bread, riders had a few hours to relax before entering the "hurricane of pain". A handful of riders opted to hit the lake jump or enjoy the beach area as a warm summer breeze filtered across the lake though the woods.

New this year were specific laps for each class and also an extension to the signature course which featured a stiff climb up the "back bowl" making for a good spectating area for the fans. 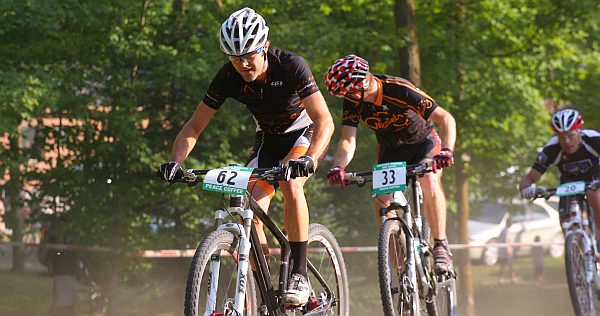 The racing was tight in the Sport, Comp and Expert races as record field sizes in the later classes making for even more handlebar to handlebar racing. The Elite women raced with the Comp men, which made even more interesting racing. The Elite men race was one of the more tighter races in recent years as a lead group did not form until the later laps. From a lead group of Brendan Moore, TJ Woodruff, Paul Hanson and Scott Kylander-Johnson, Woodruff made his move middle of the final lap to nip Moore by just a few seconds.

A warm breeze under mostly cloudy conditions welcomed riders Sunday morning as talk of possible thunderstorms later in the day buzzed among the riders. Many riders said a rain shower would be welcomed to help settle the dust and tack up the track but a 2 minute teaser from above would be the only moisture to make way from the skies. Continued overcast conditions kept the temp from getting too warm.

Kids Comp were first to head out as finishing times were faster than the day before. My son Jens, racing in Kids Comp said Sunday was the hardest day as "those dudes got struck by lightning on Suicide hill and came flying by me at the top". Catching the morning action near the start finish area was TJ Woodruff who was sizing down his handlebars to make weaving through the tight trees flow with a bit more ease.

Not only were there  battles for cross country placings, final stage race classification was on the line as the Pro women final result came down to just two seconds at Chloe Woodruffs finishing win in the cross county was just enough to secure the overall. Once again, the lakeside drops were the popular place to watch riders navigate the fall line descent towards the lake as the powdery clay broke down making for an extra challenge. 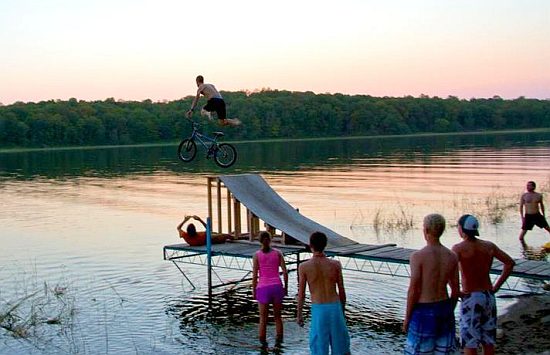 Sunday evening wrapped up a great day as kids zipped around on the dirt jump track, big air into the sunset off the lake jump including Pro men stage race winner Brendan Moore who took to the sky among others and a big bonfire with racers reliving the racing action and closing out the day.

Thanks to all the racers who made it a great weekend and the staff, volunteers and everyone behind the scenes to make things happen.

Big thanks to Bruce who provided fantastic coverage for all three races:

The Wisconsin Off Road Series provides a final tune up for Chequamegon racers as the series heads to it's farthest point south to hit the slopes of Geneva Resort for the Treadfest. Course features include the infamous “Rock Garden”, the white knuckle drop of the “Colorado Heartbreaker”, the smooth fast lines of “The Pines”, the wood bridges in “Butch’s Playground” and the carving corners of The Big “O”. For those who are not out on the trail, the Mountain Top Lodge offers great indoor and outdoor viewing of much of the trail system for family and friends, state race directors.